For an inclusive society and economy in Indonesia as well as elsewhere a balance between economic development, social justice and progress as well as ecological sustainability has to be defined. This transformation process has to be shaped politically and has to be broadly anchored within society. Issues like industrial policies and relations, the education system, just taxation and economic inequality play therefore an important role.

Since the early 1990s, Indonesia has been a (lower)-middle income country. The countries growth rates - while superior to those of most developing countries -remained below those of East Asia's most dynamic economies in recent years, while economic inequality increased significantly. Indonesia's economic growth in the last two years fluctuated around 5 percent. The reduced economic growth in major export markets and the recent softening of commodity prices are accelerating challenges for Indonesia´s economic performance. But some observers say this might also offer an opportunity to enhance the quality and diversity of investments in Indonesia. Over the past decade, high commodity prices tilted investment incentives in favor of the resource sector and non-tradable sectors (mainly the real estate sector) against manufacturing and other tradable sectors. Since 2005, commodities have overtaken manufacturing as Indonesia's largest exports. Going forward, lower commodity prices should increase the relative profitability and attractiveness of manufacturing. This could help Indonesia to develop its industrial base, create more employment as well as advance good industrial relations and therefore reduce economic and social inequality.

In close cooperation with our partner ministry Kemenko PMK, other government agencies and with partners from civil society FES is committed to make a contribution to support this transformation process; by promoting the three dimensions of sustainability within Indonesia´s development on national as well as on local level and by improving women, youth, elderly, disabled and other vulnerable groups access to equal opportunities in life.

This is reflected in activities on the Economy of tomorrow; on debates how to avoid the middle income trap, by addressing the implications of joining the Trans-Pacific-Partnership; by supporting a platform on green economy; by a series of road shows on the role of youth and women in the nation character building; studies on women´s access to pro-poor programs; a national youth camps and last but not least trainings on pro poor budgeting on the implementation of the new village law for Kepala Desa (village leader) and other local actors. 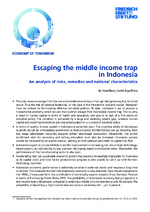 an analysis of risks, remedies and national characteristics / by Faisal Basri, Gatot… 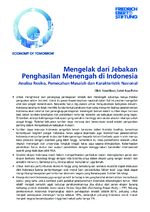