Outreach event of the Bali Democracy Forum in Berlin. 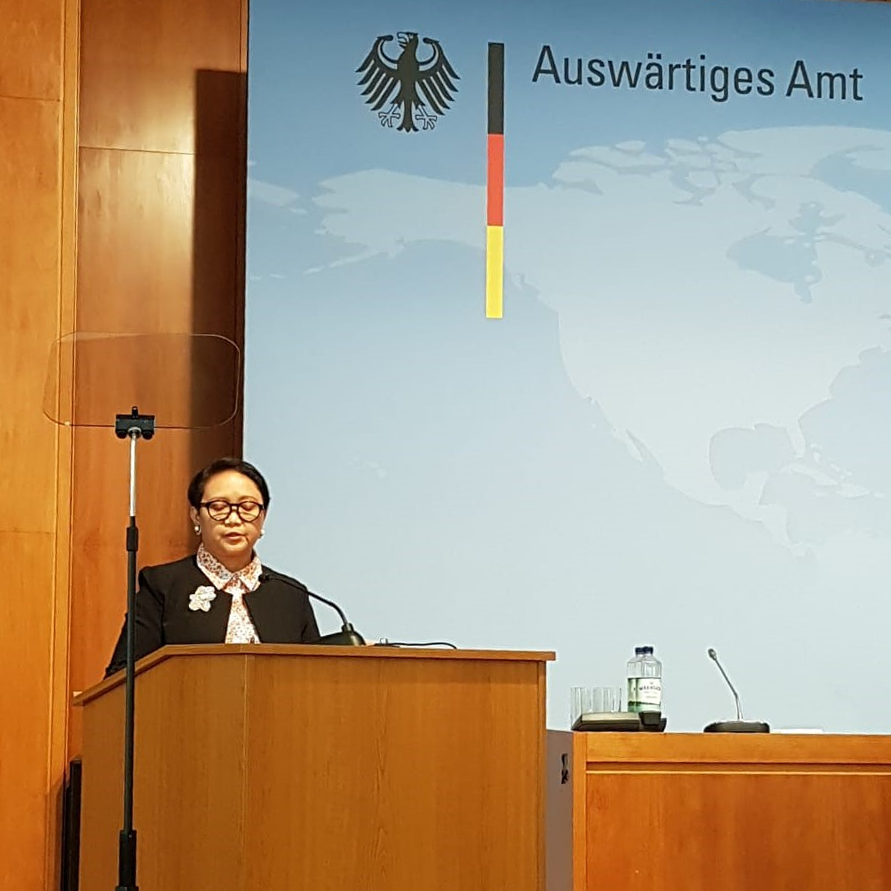 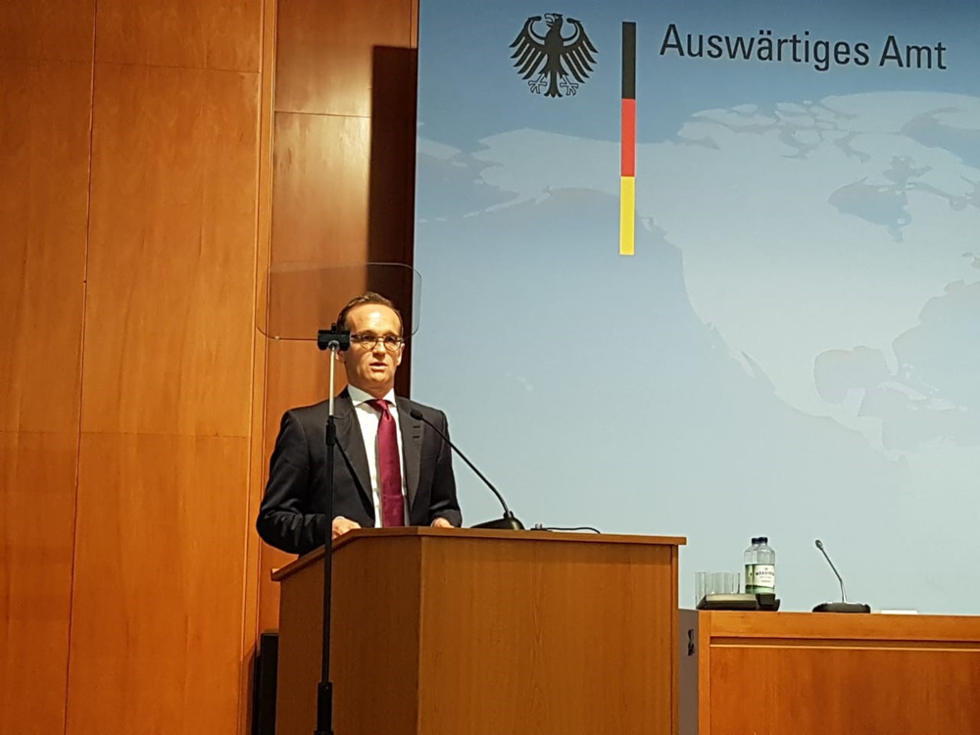 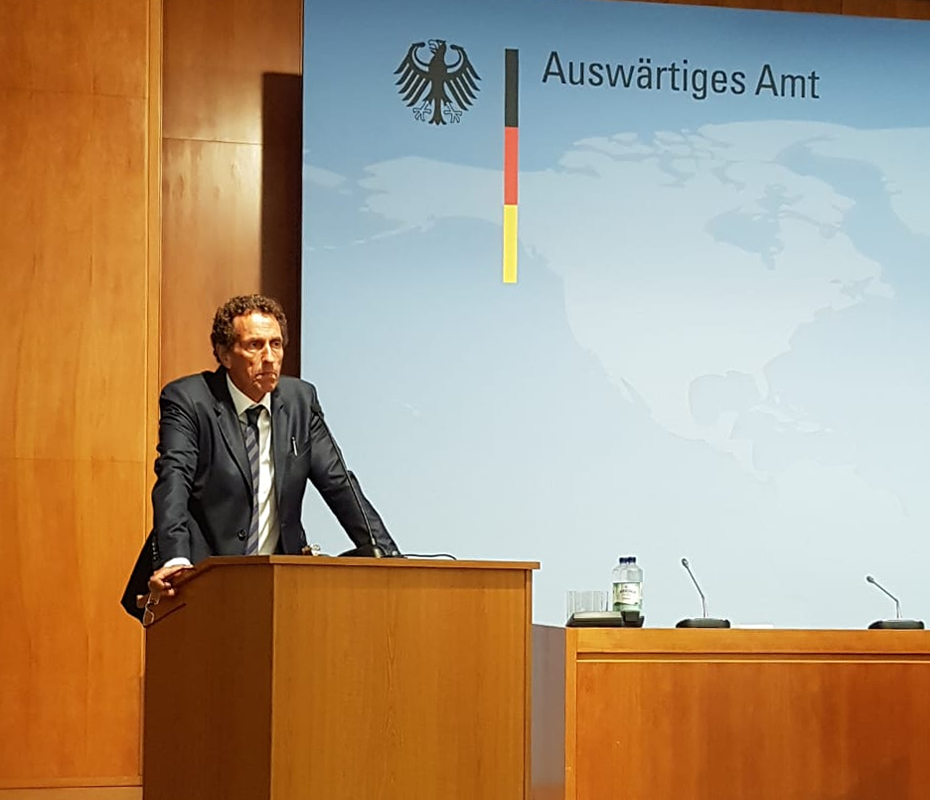 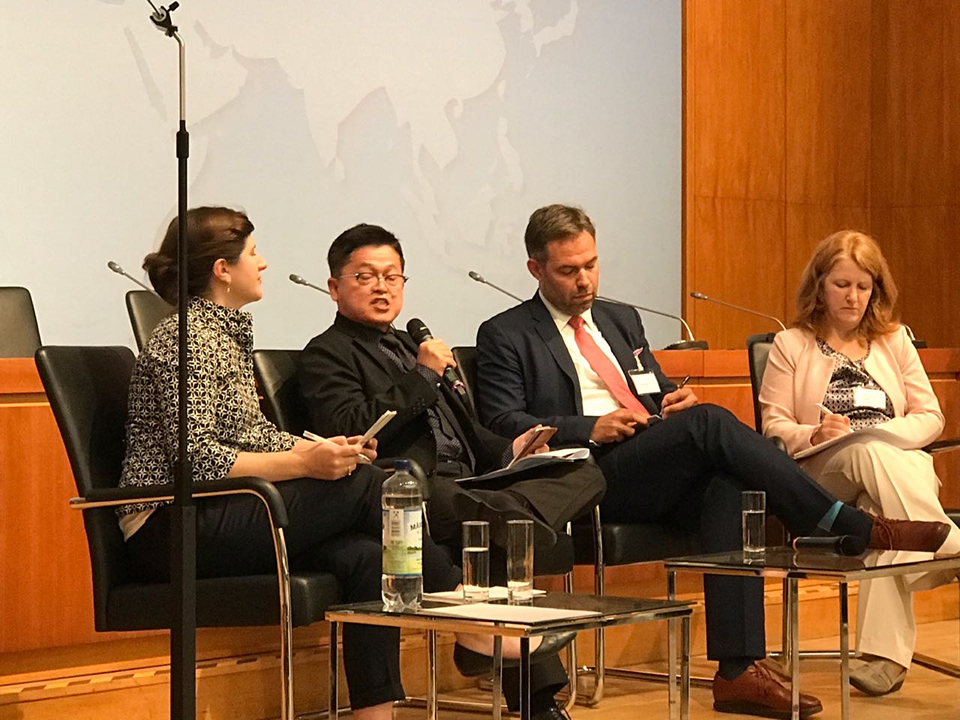 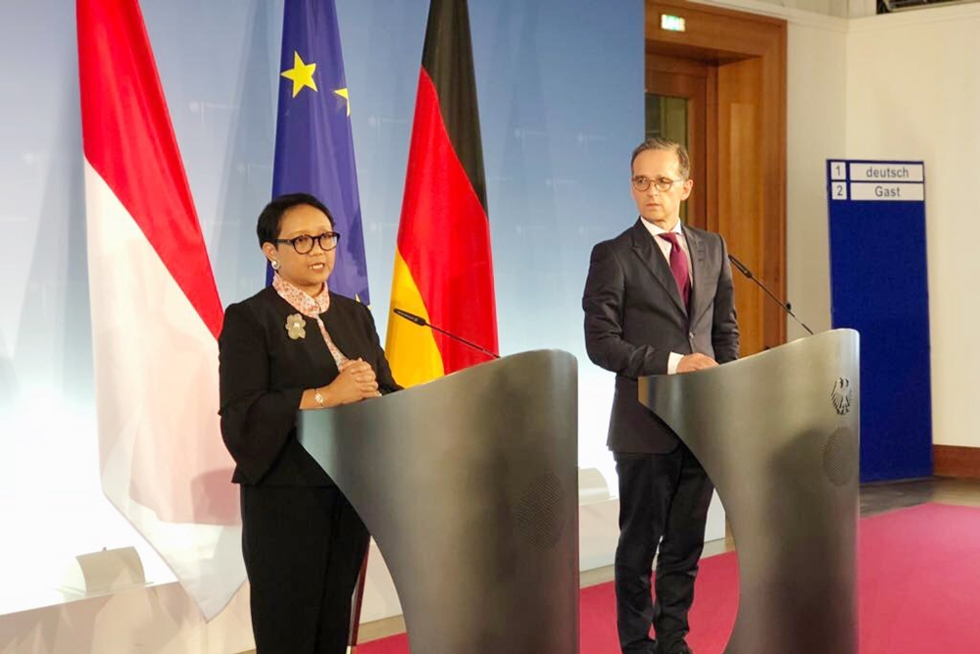 The Indonesian Ministry of Foreign Affairs (KEMLU), the Federal Foreign office of Germany (AA) and the Friedrich-Ebert-Stiftung (FES) organized together;
The Bali Democracy Forum Berlin Chapter on:Migration and Democracy,
which took place on Friday, the 14th September 2018 in Berlin, Germany.

Founded in 2008, the Bali Democracy Forum has been convened by the Government of Indonesia with the assistance of the Institute for Peace and Democracy (http://www.ipd.or.id/). It is an open and inclusive annual intergovernmental ministerial-level forum, which aims to expand and consolidate democracy in the Asia-Pacific region.

Retno Marsudi and Heiko Maas agreed in their statements that the international challenges and opportunities of migration can only be handled based on a comprehensive national strategy and intensified multilateral coordination.

Retno Marsudi: [...] A Solution to migration lies not only in national legislation... but also in the cultivation of a tolerant and conducive environment that fosters inclusion. [...] another important and relevant issue that democracy must address is... the rising inequality... within and across countries. [...]

Heiko Maas: [...] Almost 70 million people around the world were fleeing conflicts or persecution at the end of 2017, and the numbers are rising. Add to that the millions of people leaving their homes for economic or social reasons. The idea that this global trend is something we could deal with at the national level - the very idea sounds frankly naive. If we really want to tackle the challenges of migration, we will need international vision and multilateral cooperation. [...]

The foreign Ministers of Indonesia and Germany both also stressed in this context the importance of the Global compact for migration, which is going to be finally adopted in December 2018 in Marakesh.

Heiko Maas: [...] Given the polarized debate raging on all five continents, it is nigh-on miraculous that the international community managed to reach an agreement on the topic of refugees and migration early this summer. The consultations on a Global Compact on Refugees and a Global Compact for Migration came to successful conclusions. More than 190 countries found agreement on what is a very complex and, as we know, emotionally highly charged subject. That was another victory for multilateralism - and such victories are very important, especially these days! It is the result of years of discussion among the members of the United Nations, civil society, the private sector, scientists, national parliaments and countless other indispensable players. [...]

A keynote address by former State Minister Prof. Julian Nida-Rümelin, - in which he elaborated on seven human-rights based ethic postulates of migration and a cosmopolitan legitimization of national state borders - laid the ground for an intensive exchange in four thematic panels, in which Asian and European experts from government, intergovernmental bodies like ASEAN, EU and IOM as well as civil society from the FES network in Asia explored national and regional experiences as well as the global dimension of the interaction between democracy and migration.

Since in both host countries and beyond there is interest to address questions like; do the pressures resulting from irregular migration affect the ability to defend democratic and welfare structures at home as well as a rule based global order?

The UN estimates that 258 million people worldwide live in places other than their country of birth, an increase of nearly 50% since 2000 roughly two out of three international migrants are migrant workers. Are democracies up to the task of absorbing these migratory flows?

Will the drive for globalization, despite its promise of fewer barriers to the movement of people and ideas, lose support?

Rafendi Djamin, Senior Advisor of the Human Rights Working Group-Indonesia (HRWG) and previously envoy of the ASEAN Intergovernmental Commission on Human Rights (AICHR) called it a very serious concern, that the European Union and its members states - which are perceived as established democracies - have failed to humanely and adequately response to the global refugee crisis.

Emblematic of this ethical dilemma for states has been also the situation in Germany in the last three years, since Germany has been confronted with an unprecedented human refugee crisis;
After the German government in autumn 2015 gave almost one million refugees asylum - mostly Muslims from Syria, Iraq and Afghanistan with a complete different cultural background -, it becomes more and more obvious how challenging it is sometimes to bridge cultural and social differences and preserve unity across different groups. Quite a few German citizen welcomed those in need with open arms, others were more doubtful... and some reacted with fear and hate.

So even in a considerable stable democracy and rich country like Germany it can now been observed how difficult it is to uphold and guarantee the social contract of a society.

Heiko Maas: [...] the migration debate is threatening to split our societies. We're seeing that around the EU and also right here in Germany. The divided camps seem irreconcilably opposed. Some even want to see migration as the source of all political problems. Migration is being misused as a means of polarizing debate. People are stirring up and misusing anxieties that only indirectly have anything to do with migration - fears about pensions, care for the elderly, jobs, security, education, and anxieties about the consequences of globalization and digitization in general. [...]
The huge task of integrating migrants into their host communities can also only be achieved if civil society is strong. Strong civil society is one of the defining characteristics of a democracy. I am therefore most particularly pleased that the Bali Democracy Forum brings together representatives of civil society from our two regions. [...]

Retno Marsudi: [...] No democracy is immune to the risk of backsliding - even mature democracies face the danger of setbacks to theirs practices. [...]

[...] Migration had added complexity to social and economic inequality, which potentially leads to imbalances in voices, representation, opportunity and access that divides the population. This kind of alienation can increase support for populist and extremist views and violent conflict - particular among young people. [...]

The BDF Berlin chapter conference outcome will be presented at the 11th Bali Democracy Forum in December 2018 in Bali, Indonesia, which will carry the topic of Democracy and Prosperity as well as at the UN Intergovernmental Conference in Marrakesh in December 2018. The BDF Berlin chapter will therefore complement the ongoing work by the UN on the Global Compact for Migration to be adopted by heads of states and governments at the Intergovernmental Conference in Marrakech on 10th and 11th December 2018.

With its focus on Migration and Democracy this unique conference in Berlin added new insights and inspiration for a high-level exchange on the political, economic and social impact of migration. The BDF Berlin chapter also provided an occasion to reaffirm Germany's and Indonesia's commitment to close co-operation including the promotion of democracy, multilateralism and the strengthening of a rules-based world order.

According to Retno Marsudi the undertaking demonstrated Indonesia and Germany´s commitment to promote democracy and global partnership for peace, tolerance, and respect for cultural and religious diversity. [...] Democracy cannot be taken for granted, nor can it take place by chance. We need to work hard to make democracy work and ensure it delivers.

In a subsequent press conference Heiko Maas lobbied in this spirit again for an alliance of multilateralists as he has done already during a Japan visit in July 2018
Link: https://www.auswaertiges-amt.de/en/newsroom/news/maas-japan/2121846