The Fourth Industrial Revolution, Digitalization & Work 4.0 - a Right to Training? 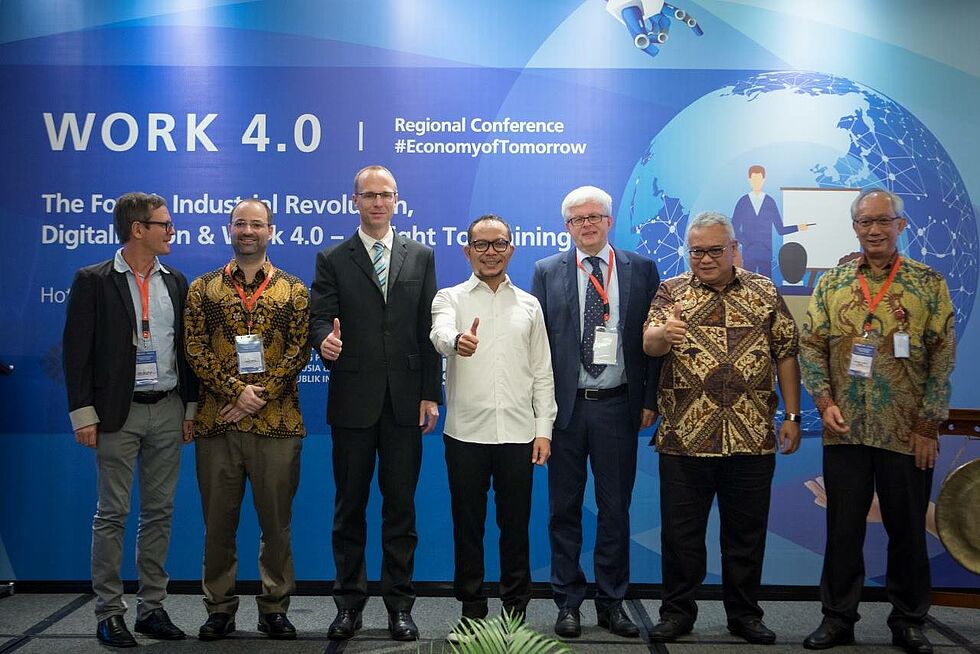 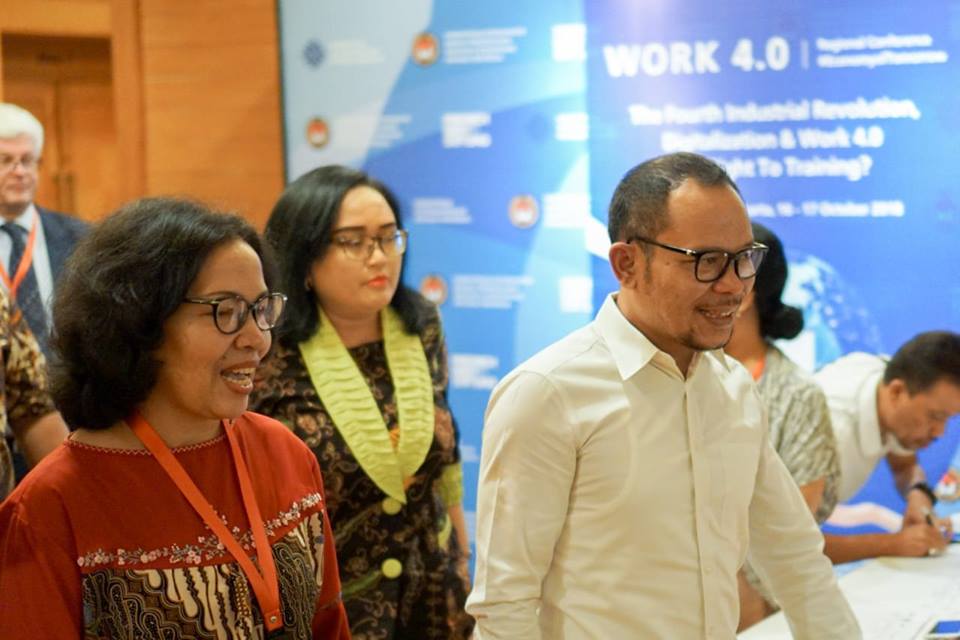 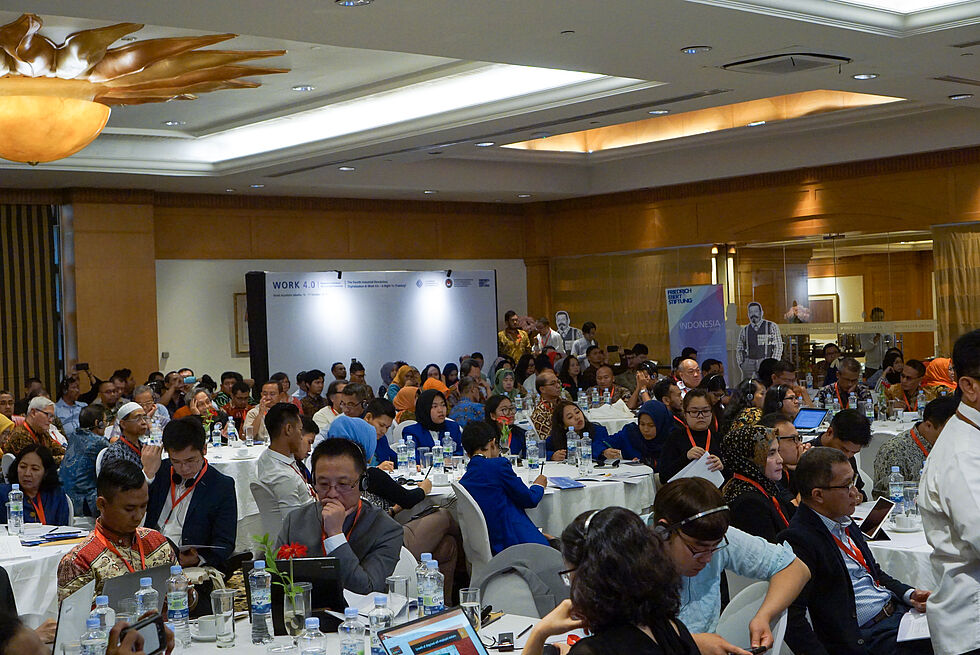 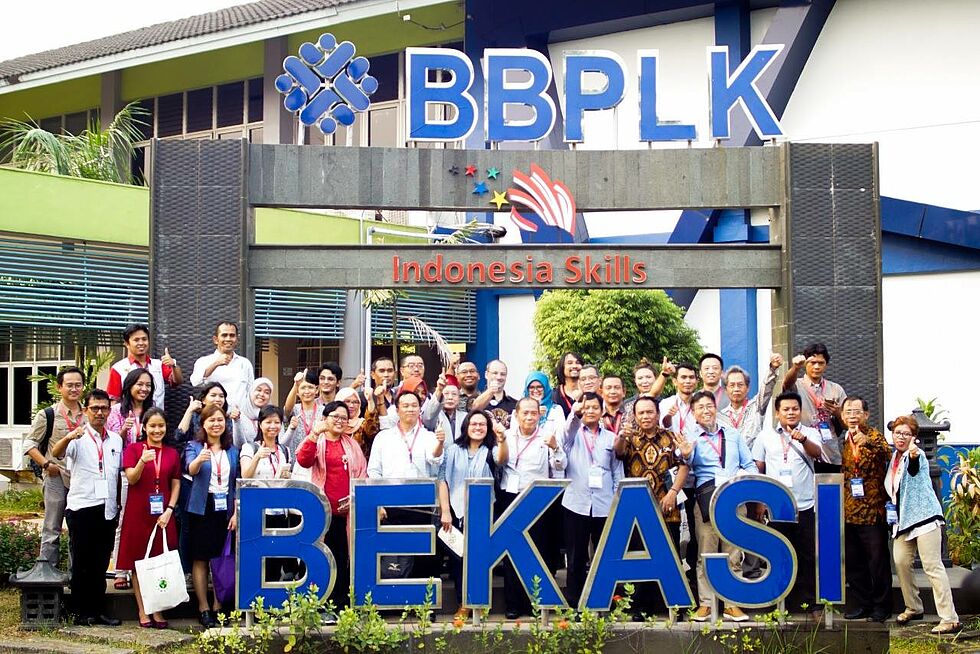 The Fourth Industrial Revolution, Digitalization & Work 4.0 - a Right to Training?
was successfully hosted on the 16th &17th October 2018 in Jakarta.

More than 200 experts from the Indonesian and German government, national and international trade unions, the ILO, the Indonesian employer's association, from different enterprises, civil society and academia from Indonesia, China, India, Philippines, Vietnam, Bangladesh, South Korea, Thailand and Singapore exchanged ideas on the impact of the fourth industrial revolution (4IR) on the quantity and quality of labour, while they addressed practical questions like:

• What progressive economic policies are needed to avoid a clash between the restructuring of global and regional value chains in the course of the fourth industrial revolution and economically, socially and ecologically sustainable manufacturing innovation?

• How far will the shrinking comparative advantage of low wages effect countries in Asia and what are the adequate policies to address this trend?

• Gig-economy, ecommerce, intelligent manufacturing: Where lay the chances, where the challenges?

• Skills development (upskilling, re-skilling and life-long learning) has become a strategic concern under the fourth industrial revolution.
Which policies can enable an efficient, fair and affordable system to up- and reskill workers?

Labeled around the globe as Industry 4.0/Work 4.0, Made in China 2025, Make in India or Making Indonesia 4.0, the growing interconnectedness and rise in cooperation between man and machine is not only changing the way we produce things, but also leading to entirely new products, services, jobs, working conditions and work profiles.
The effects of the digitalization of the economy, of labour markets, of labour law, of work conditions and health standards, wages and skills needs are already underway across all economic sectors. Existing and developing legal and regulatory standards on enterprise level and beyond are affected.

The Fourth Industrial Revolution is likely to lead to greater inequality in Asian countries and beyond because further automation will lead to the displacement of more workers, especially those who are unskilled and semi-skilled. [...] It is thus urgent for ASEAN to develop economic growth strategies that take into account the impact of technology on workplaces. But in doing so, we must not lose our development perspective - our vision of how workforce preparations and adjustments should be undertaken in an inclusive, equitable and sustainable manner.

According to Volkswagen Prof. Boy Lüthje,

The digital economy, or digital technology are mainly used to reorganize low-wage work both in manufacturing and in the service sector. So, there is an ongoing competition based on low wages and low manufacturing cost which at this point is mostly being reorganized through the digital economy rather than disappearing. And for that, the questions of the labour standards, decent work, labor rights, individual economy both on the side of production and on the side of distribution and services remain of greatest importance.

Digitalization could bear a huge market potential for a country and boost the economy. Jobs might be created or enhanced but they could also be destroyed. The digitalization of the economy offers opportunities and poses challenges for economic progress, for employment, for "decent work" and social equality.
Industry 4.0 and work 4.0 are therefore not only economic projects but will change society as a whole and should therefore be considered as social (and political) projects.

The opportunities, but also challenges arising from gig-economy and crowd work on online platforms have been widely acknowledged. Platform work concerns all sectors, skills and wage levels, physical and online work.
It has been shown that the gig-and platform economy as well as crowd working are vulnerable to ignore decent work principles.

After listening to the first-hand presentation by a Gojek driver, who is also a trade union chair, the Indonesian government representatives and experts agreed that it is imperative to analyze thoroughly the working conditions of Gojek-drivers and other workers in the gig-and platform economy in the interest of the government, the customers and first and foremost the workers.

Representatives of Indonesian trade unions called on better labour protection, which ignited a heated debate on how to organize informal and/or non-standard work; followed by a controversy on who will organize these workers. Calls for the need of a trade union 4.0 did not convince all experts.

The presentation on Taobao villages (a subsidiary of ecommerce giant Alibaba)
in China illustrated the trend of low-cost urban village supply chains, informal employment patterns and decentralized production organization to satisfy small and fragmented orders. But if the Taobao village one day becomes a government-guided business model - mitigating the above-mentioned negative aspects - it might be not only an interesting development program for rural and remote areas in China, but also for other Asian countries to reduce the development gap between cities and villages, to improve people's welfare and to create employment in rural areas.

Like the Indonesian Minister of Manpower Hanif Dhakiri said in his keynote speech:

In times like these the best protection is to respond with good basic education, skilling, re-skilling, upskilling and incentives for life-long learning.

Based on this consensus the conference experts engaged in a heated debate on the questions who will provide the funds for these forms of skilling and the respective training centers.

The core issue worldwide seems to be how to guarantee an efficient, fair and affordable system to up- and reskill workers.

The discussion on the content of skilling has been further elaborated during a two hours excursion to the 4IR vocational training center in Bekasi - outside of Jakarta.

Both, opportunities and challenges for the economy and for employment, need to be recognized and incorporated in policy approaches. Therefore, an in-depth analysis of the implications of the digital economy on the labour market and sectors of employment is a necessary precondition. Coordination between employers and workers representatives as well as with the government is needed. This is particularly significant in times of revolutionary changes of job profiles, shifting employment relationships and an increase in vulnerable employment - with women much more at risk than men. Hence it is important to jointly provide transition pathways for those whose jobs are at risk because of automation and digital disruption, while others might need assistance to be prepared for their new jobs.

The German Ministry of Labour and Social Affairs (BMAS) White PaperWork 4.0 approach on (decent) work in the digital age which has been developed in the course of three years with the involvement of policy-makers, employers, unions, academia and civil society is an interesting case study how all relevant stakeholders jointly drafted a in-depth analysis how to harmonize technological and economic development and decent working conditions.
Link for download of BMAS White Paper Work 4.0 (English version): https://www.bmas.de/EN/Services/Publications/a883-white-paper.html

As a follow-up and conclusion of this regional Economy of Tomorrow conference, representatives of the Indonesian government, the German government and FES Indonesia agreed to intensify the cooperation in the field of vocational training, labour relations and labour protection in the gig-economy as well as labour law 4.0