Together with the Indonesian Ministry of Manpower and the coordinating Ministry of Human Development and Culture FES Indonesia office organized a two days’ conference on Labour 4.0 - Digital Economy and its Implications for Employment on 26th & 27th April in Jakarta. 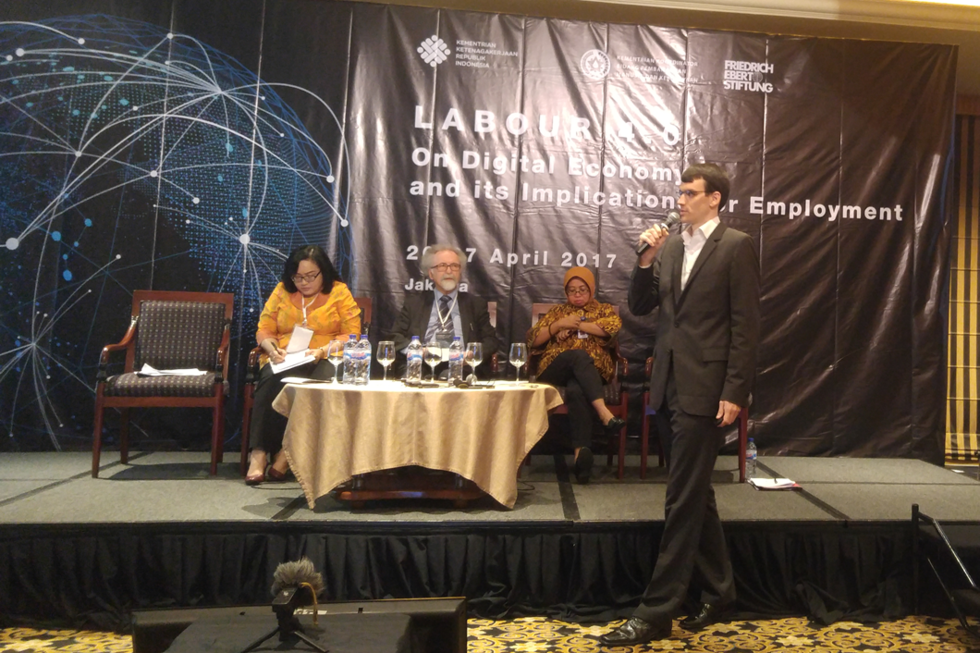 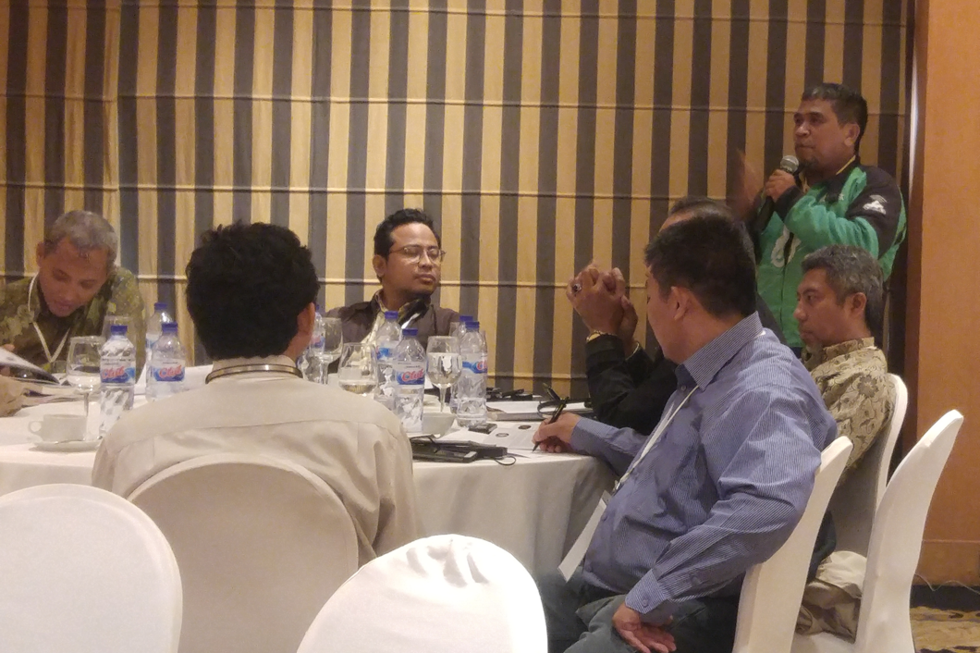 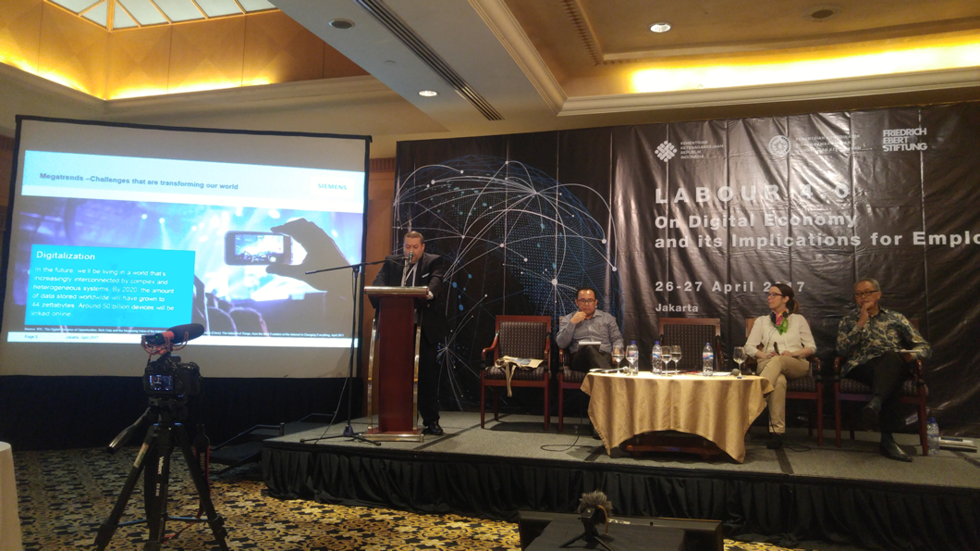 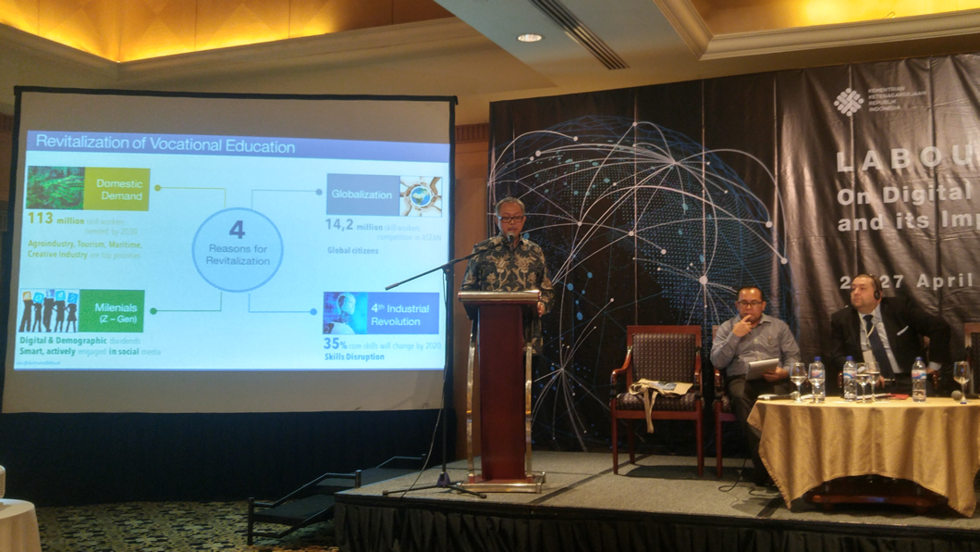 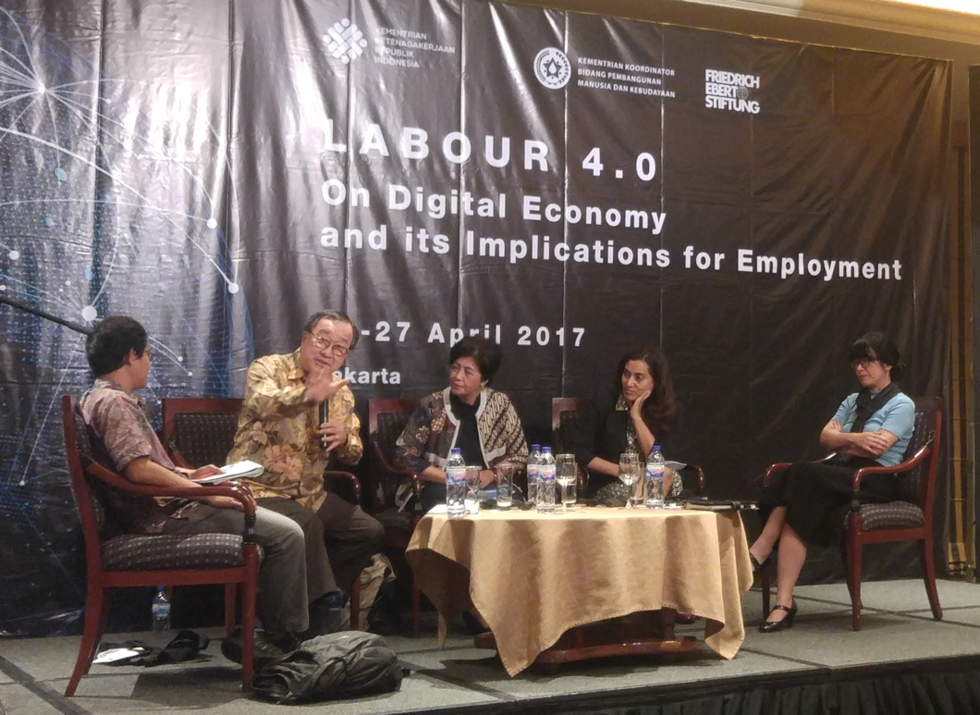 Together with the Indonesian Ministry of Manpower and the coordinating Ministry of Human Development and Culture FES Indonesia office organized a two days’ conference on Labour 4.0 - Digital Economy and its Implications for Employment where resource persons and participants from different Indonesian government agencies, 6 Indonesian trade union Confederations, sector and enterprise unions, employers association and civil society exchanged experiences and ideas with representatives of German IGMetall, German Ministry of Labour and Social Affairs, work councils from Siemens and Bosch, German Labour Law experts, ILO, UNI-Apro and the Justjobs Network on the impact of the digital transformation on labour markets as well as on best practice industrial relations on enterprise level in Indonesia and Germany.

Hendrik Barkeling, deputy head of mission, German Embassy, emphasized in his welcome remarks that the German government as current chair of the G20 has put the digital economy high on the agenda, while the cooperation between Indonesia and Germany on vocational training will be further intensified.

Ibu Haiyani, General Secretary for Industrial Relations at the Indonesian Ministry of Manpower, pointed out in her welcome remarks that Indonesia is one of the largest markets for new technology & media. The question now is how the new technology can be efficiently utilized to create new employment.

In the course of the two days’ conference it has been further discussed how to derive the greatest possible benefit of the technological advancement for the labour market, employment and working conditions. It has also been addressed what qualifications are necessary and therefore what vocational training is needed in the age of the digital economy.

The digital world of work is placing greater demands on employers as well as on worker’s representatives as a result of rapid changes and greater complexity. Accordingly, both have to be able to correctly assess technical and organisational developments, find approaches which reflect workers’ interests, and reach solutions within the social dialogue on enterprise level. Against this background representative of Trade Unions, enterprise works council, Employers Association and the Government discussed best practices of industrial relations on enterprise level in Germany and Indonesia.

Moritz Niehaus, representative of the Department Future of work, German Metal workers Union IGMetall, said that technology and digitalization will make competition on the labour market even more fierce. As a conclusion of the impact of the digitalization on the German labour market Niehaus explained in his presentation that future-oriented qualification and vocational training on enterprise level is the key issue.

Pak Ananto Kusuma Seta, Senior Advisor to the Minister of Education and Culture on Innovation and Competitiveness, portrayed that 35% of the required core skills on the labour market will change by 2020. He elaborated further that the Indonesian government is now revitalizing vocational training to prepare 100 million skilled workers by 2020. To enable them to work worldwide without losing their Indonesian DNA.

Michael Schmidt, Chairman of the Human Resource Council of the German Ministry of Labour and Social Affairs (BMAS) illustrated in his presentation the BMAS initiative; White paper Work 4.0. He further described in his talk how person-related technologies offer new inclusive opportunities for persons with disabilities on the labour market.

A vibrant discussion ensued on the impact of app-based transport companies like Go-Jek on the Indonesian labour market. Everyone at the conference agreed that Go-Jek is creating a lot of new employment – especially by providing jobs for persons in the informal sector. But Go-Jeks business-model to define itself as an IT-company that has no direct employment relationship to the drivers created an intensive debate.

Trade Union representatives from UNI Apro, from Telkomsel Union and Hero Supermarket Union explained how they struggle to ensure decent jobs for their member, while they take also the well-being of the enterprise into consideration.

Against the background of the global digitalization trend he called for a global social digital compact. "We as trade unions are not against digitalization or globalization, but we want a fair social contract", said Chris Ng

"We as trade unions are not against digitalization or globalization, but we want a fair social contract." - Chris Ng

Finally experts from ILO, UNI Apro and the justjobs Network pointed out the impact of the digitalization on regional labour markets, changing job profiles, new qualification requirements, the shrinking comparative advantage of cheap labour and the possibility of an increasing Re-shoring trend from developing to developed countries.

"The Future of work has started now", said Sabina Dewan, Director of the JustJobs Nework. A demographic dividend in a country comes only once, while the digital dividend is on the horizon. It would be a lost opportunity, if people are not skilled enough to play out the digital dividend. But a good comprehensive education is the basis to qualify the workforce for the digital economy, said Dewan.

"The Future of work has started now." - Sabina Dewan

As a joint conclusion, the participants agreed the finding that the digitalization of the economy will happen inevitably. There will be no return to a world before digitalization. But it’s not a natural disaster either - because it is and stays shapeable. Adequate and future-oriented qualification – based on good comprehensive education - is playing a more and more decisive role. 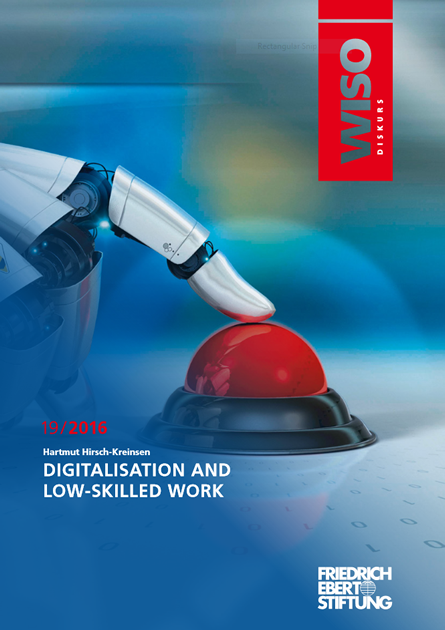