The story of the past two centuries isn't only one of rapid industrialization, displacing agriculture as the preeminent economic activity of societies across the world, but also of relentless urbanization. By 2014, there were more people living in cities than in rural areas, marking a decisive shift in the makeup of human civilization. In 2014, according to the United Nations (UN), 54% of the world's population lived in urban areas, a proportion that is expected to move up to 66% by 2050, adding 2.5 billion people to urban population, with 90% of it concentrated in Asia and Africa. In fact, across the world, what we see today are not only cities, but "mega-cities" with populations comparable to small-size countries. Greater Jakarta (Jabodetabek) has a whopping population of 28 million.

Against this background and in order to promote intergenerational justice, equal distribution, social mobility, social space and family friendliness in urban neighborhoods FES together with PMK, other government agencies and civil society partner supports an exchange on Social (sustainable) Cities. 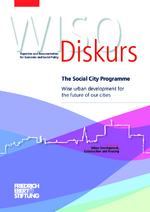 wise urban development for the future of our cities : a publication of the Division…